To mitigate losses suffered by homeowners victimized by deceptive practices during the mortgage and foreclosure crisis, the Attorney General obtained broad-ranging settlements from three major banks in 2013 and 2014. The settlements were with Bank of America, Citibank and JPMorgan Chase & Co. and related to their packaging, marketing, sale, and issuance of residential mortgage backed securities. While each is different, all of the settlements provided reductions in principal balances, reductions in interest rates and other relief to qualified homeowners. The settlements also appointed monitors to oversee the banks to make sure they comply with settlement terms.

Not every homeowner qualifies for relief under the settlements. Those who qualify may be contacted directly by their bank or servicer, and may receive one or more forms of relief depending on their circumstances. To find out if you may be eligible for a loan modification, refinance, short sale or other foreclosure prevention relief under the settlements, contact your mortgage servicer. To find the servicer on your loan, look for a contact phone number on your mortgage statement. Contact the bank or servicer listed on the statement to ask who services or owns your mortgage loan. 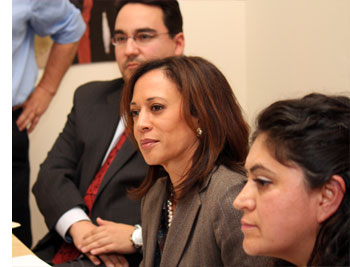 Attorney General Harris also secured significant relief for Californians under the National Mortgage Settlement, which involved five major banks: Ally Financial, Bank of America, Citibank, JPMorgan Chase, and Wells Fargo. The settlement created new servicing standards that remain in place until 2015; provided cash payments to many homeowners who were wrongly foreclosed upon; provided loan modification relief, short sale opportunities, and other relief to many distressed homeowners; and appointed a monitor to oversee the banks to ensure they complied with the settlement terms.

Professor Porter released a series of reports as the California Monitor, including reports on the banks' compliance with settlement reforms, issues stemming from the settlement, and her recommendations for future implementation. These reports can be found below: