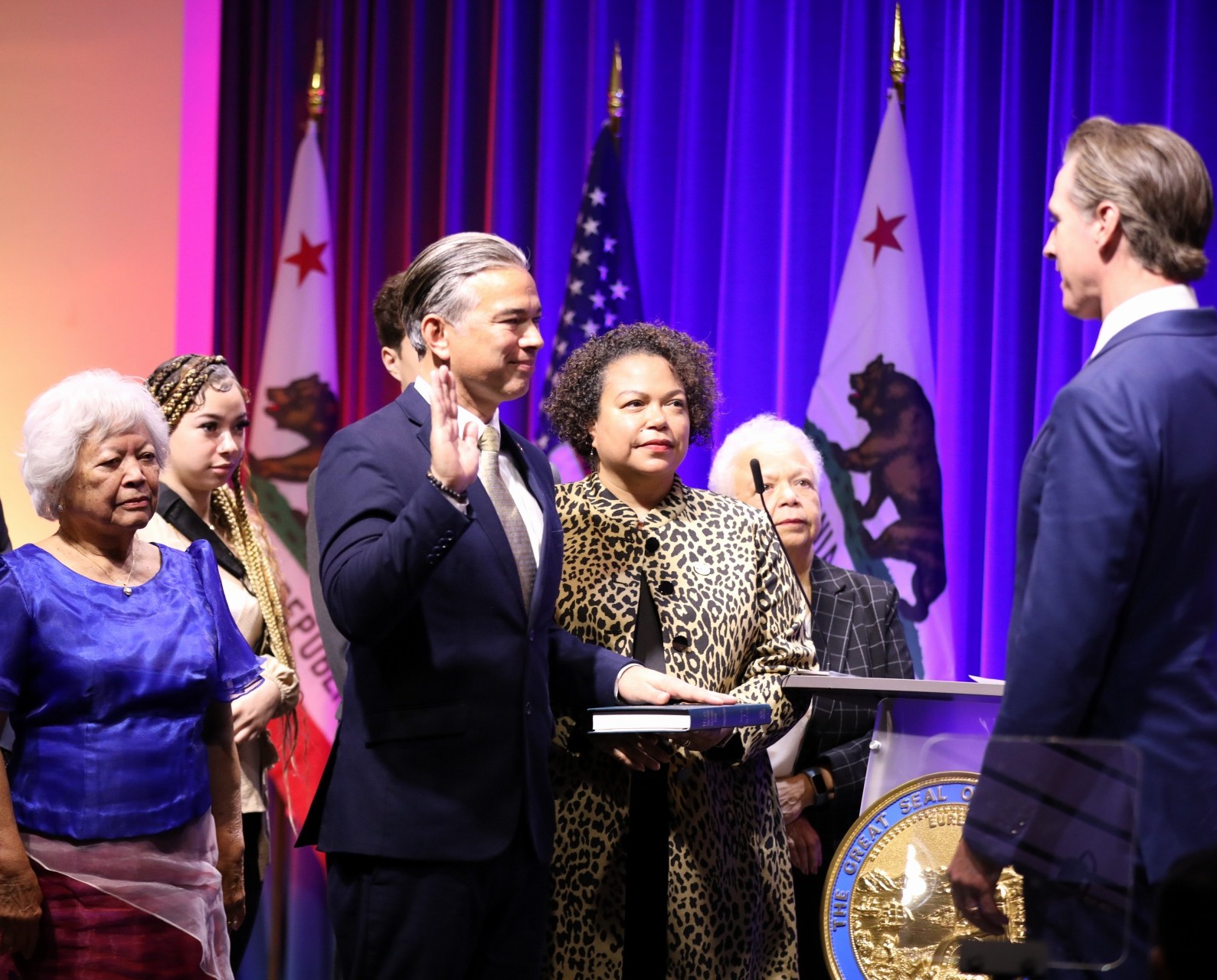 Thank you, Governor. I'm humbled by your presence and it's with deep gratitude that I thank you for selecting me to serve in this role almost two years ago. Thank you for being here again, today, to administer my oath of office now that the people of California have affirmed your choice by independently electing me to a full term as Attorney General.

Lisa Ling, Chairman Tarango, Angel Bonilla, Anna Yang, Dolores Huerta, and Minister White, who will close our program today, thank you for gracing us with your words and your wisdom.

My friends, supporters, and my colleagues — current and former — thank you for being here. I'm grateful for your support and honored by your presence.

And, most importantly of all, to my family:

Mia, my partner in life and in service;

My 85-year-old mother Cynthia, who has always believed I can do anything;

All my family here and afar — my mother-in-law Enid, my brother and sister Marcelo and Lisa, my children Reina, Iliana, and Andres.

You fill my world with light and love.

And, of course, my father, Warren, who we lost in July, joins us today in spirit. He had been at every swearing-in to every elected office I've ever had the privilege to hold.

Dad, I miss you. But on my best days — on a day like this — I wake up and see your glimmer reflected in the mirror. I carry your legacy forward, your commitment to righting wrongs.

My journey for justice began with his.

When he was no older than Andres' age today, my Dad turned on the radio and TV to stories of steep injustices in America:

Americans denied the right to vote.

An entire race told to drink from separate water fountains. To swim in separate pools. And to eat at separate lunch counters. Because of the color of their skin.

My dad felt a call to action, and while studying at Berkeley, a friend mailed him voice recordings taken of a minister in the deep south who was fighting these injustices head-on.

The sermons were unlike anything he had heard before. The minister preached about a God of boundless love, about a more just society. He preached about everyday people — you and me — changing the world.

The minister was Dr. Martin Luther King Jr. and my dad purchased a train ticket to the South to join his cause.

But I wasn't born in Selma where my dad organized for voting rights. I wasn't born back in Berkeley where he met my mom. I was born in the Philippines, where my parents served together as social justice missionaries.

I was all of two months old when their mission came to an abrupt halt. A dictator rose to power. He and his forces trampled some of the very same civil rights my father fought for in America — and that I now defend. So we fled, seeking opportunity and a better life.

At two months old, my feet made contact with this land of opportunity for the first time.

It was here in California that my fight for justice began when my parents moved us to the Tehachapi mountains — to a trailer at the United Farm Workers' headquarters in La Paz, the heart of the farmworkers' movement.

They were recruited to help Filipino and Latino farmworkers advocate for better wages and working conditions, alongside Dolores Huerta, Cesar Chavez, and Philip Vera Cruz.

Some of my first memories are from that trailer. Playing with the kids of migrant workers and organizers near dusty patches of gravel. Listening to my parents recap their day at the dinner table.

But most of all, more powerful than these faint memories, are the powerful lessons I learned about equality.

Everyone was there because of the mission. We all saw injustice in the world and we wanted to fix it.

It's why I decided to become a public attorney — to fight for those who've been wronged.

And it's that fight for justice — for all Californians — that motivates me today.

I've been excited to wake up every day for nearly two years, working for the people of this great state as your Attorney General.

I've been proud to safeguard our fundamental rights. To take on powerful interests that harm our families. To take down criminals who violate our laws.

We enshrined the strongest protections for reproductive freedom in our nation;

We launched groundbreaking efforts and investigations to tackle everything from the housing crisis to disparities in our healthcare, education, and criminal justice systems;

We sued Big Polluters, won against Big Tobacco at the Supreme Court, and secured billions of dollars from Big Pharma for harming our communities;

We took historic steps to fight a historic rise in hate; organized some of the largest takedowns of organized crime in the history of California; ushered in a new wave of transparency and trust in law enforcement; and launched new tools and resources for victims and survivors.

It's been a busy two years. Because I believe now, more than ever, we need leaders in government and law enforcement who will build bridges with our communities. And today, the people of California have an Attorney General who is doing just that.

I began with my dad's story, but when I look in the mirror, on my good days, I see another reflection, too: my mom's.

In my earliest years, she would organize a birthday party for me, and then she'd organize a protest.

I watched her demand change, demand an end to oppression, demand a seat at the table for APIs, for women, for working people… And I often saw leaders and systems that refused to listen.

The powerful shied away.

I told her, "mom when I grow up, I'm going to be that one who listens. I'm going to listen when you — when our community — needs to be heard.”

Today, I listen, and I turn the words of our community into action. If my mom was the People's Organizer, then her son is the People's Attorney.

I may have left La Paz, but La Paz never left me.

We moved to Fair Oaks — just a short 30-minute drive away from here. But this place — the capitol, the epicenter of politics and policy in California, constitutional offices — it may as well have been a million miles away.

These halls of power weren't for a brown boy born in another country. They might let the son of working parents in for the tour, but there wasn't a seat for me at the table.

My parents had made history, but when I looked in the history books, I didn't see anyone who looked like me in elected office.

No Filipino American had ever served in our state legislature — and certainly not at the helm of the nation's largest state Department of Justice.

But that's why the California dream is so potent. I believed and I dreamed — through some combination of naïveté and childish imagination — that I, someday and some way, could follow in my parents' footsteps and have my own role to play, to serve, to help, to make people's lives better.

My parents nurtured that dream. They never said no. They always said yes.

My story is at once so unlikely and yet so Californian.

Born an ocean away. Born of working parents. By most accounts, I shouldn't be here in this role. But the California Dream says something different: In the Golden State, anything is possible. I'm living proof that the California dream is alive and well.

My story can only happen here, and with this opportunity comes a responsibility to make it possible for every child… to further break the barriers my parents cracked: To make California the more inclusive, just, and equitable place we know it can be.

A few generations ago, as an Asian American, the law would have denied me the ability to freely testify in court, to access public accommodations like hotels and restaurants, to marry Mia, the person I love. Today, I'm taking office as our state's chief law enforcement officer — the person who enforces the law — and making history as our state's first elected Filipino American Attorney General.

This role is a privilege, a duty, and a sacred obligation. I will not squander it. I will use the full authority of my office — the full force of the law — to help as many people as possible and do as much good as I can.

I will defend your freedom: Your ability to choose, to love, and to live freely.

I will defend your safety: Your ability to live without violence and fear.

I will defend your well-being: Your ability to live in a healthy and welcoming community, to breathe clean air and drink clean water, and access a quality education.

And as the People's Attorney, I'm going to need you, right where you've always been every step of the way, by my side.

California, this is a new day for justice. Today, justice is "full speed ahead." Because that's the only speed I know.

Like my parents, I'm driven by the urgency of now. By the desire to protect and defend everyday people who are being hurt, harmed, mistreated, or abused.

My parents' fight for justice continues through me. On my best days, I look in the mirror and I see them.