SANTA BARBARA - Attorney General Kamala D. Harris today announced that the California Department of Justice and the Santa Barbara County Sheriff’s Department have completed a two-day sweep to remove firearms from individuals legally barred from possessing them, including persons determined to be mentally unstable and those with active restraining orders against them. The joint operation resulted in the seizure of 83 firearms, 6,326 rounds of ammunition, 52 ammunition magazines and 10 arrests, targeting individuals on the Armed Prohibited Persons System (APPS). The seized firearms included three assault weapons.

This operation, as well as ongoing and day-to-day investigations, reduced the number of individuals in APPS to a historic low. During the past 30 months, the Bureau of Firearms has conducted over 18,608 APPS cases, and has taken 335 assault weapons, 4,549 handguns, 4,848 long-guns, and 43,246 rounds of ammunition off the streets from those who illegally possessed them.

“Removing firearms from dangerous and violent individuals makes our communities safer,” said Attorney General Harris. “I thank our Department of Justice Bureau of Firearms Special Agents and the Santa Barbara Sheriff’s Department for taking on this dangerous work and their steadfast commitment to keeping our streets safe.”

"I thank the Attorney General’s Office for providing the resources to help confiscate illegally-possessed firearms in Santa Barbara County. Good people can and do differ in their viewpoints on how guns should be controlled, but I think we can all agree that firearms should not be in the hands of felons, violent offenders or persons suffering from severe mental illness. Removing weapons from those on the Armed and Prohibited Persons list targets law breakers and makes our community a safer place," said Santa Barbara Sheriff Bill Brown.

“I commend Attorney General Kamala Harris, the Department of Justice and the Santa Barbara Sheriff’s Department for their tremendous efforts getting guns and ammunition out of the hands of people who shouldn’t have them in the first place,” said Senator Hannah-Beth Jackson (D-Santa Barbara). “Unfortunately, we are a community that knows too painfully well about the costs and devastation of gun violence. These efforts help prevent potential tragedies while showing that the APPs system is a powerful tool for law enforcement to use to keep our communities safe.”

“I want to highlight the work of the California Department of Justice’s Office of the Attorney General, as well as the Santa Barbara County Sheriff’s Department, who worked together tirelessly to ensure that this illegal firearm sweep was a success. The primary goal of these sweeps is compliance, and getting guns out of the hands of prohibited individuals means safer communities and less illegal firearms throughout the County. By acting with professionalism and excellent coordination, over 80 firearms and 6000 rounds of ammunition were successfully seized with a minimal number of arrests. Locating and seizing illegal firearms is dangerous and demanding work, so on behalf of Santa Barbara County I thank all those who were involved," said Assemblymember Das Williams.

The APPS sweep, which began on February 9, was completed over two days and closed 79 cases.

Thanks to the dedication of our special agents and local law enforcement, the California Department of Justice has doubled the average number of guns seized per year and increased the number of investigations per month by nearly 300% over the past two years.

In November 2015, the California Department of Justice and the Sacramento Sheriff’s Department conducted a joint APPS operation, resulting in 150 investigations and the seizure of 82 firearms, and 10 arrests.

In May of last year, an APPS collaboration between L.A. County local law enforcement and California Department of Justice Special Agents resulted in the arrest of 26 individuals, the seizure of 254 firearms, 48,000 rounds of ammunition, and 18 illegal high capacity magazines.

The APPS database was completed in November 2006, and instantly created a backlog of thousands of investigations. APPS identifies individuals who purchased firearms, but later became prohibited from legally owning them because they were convicted of a felony or a violent misdemeanor, placed under a domestic violence restraining order, or suffer from serious mental illness.

California is the first and only state in the nation to establish an automated system for tracking handgun and assault weapon owners who might fall into a prohibited status. 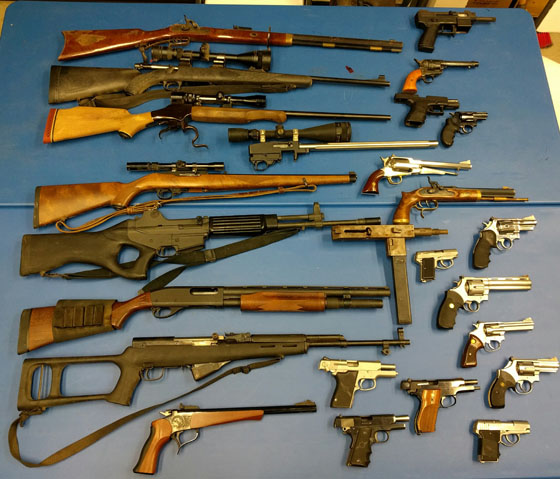