The Division of Recidivism Reduction and Re-entry presents the inaugural Smart on Crime Awards, recognizing individuals who are leading the way in innovative criminal justice programs. These award recipients have demonstrated leadership in the development of successful recidivism reduction programs and are making substantial contributions to re-entry efforts in California.

The awardees' work is preparing offenders to thrive when they return to their communities through efforts like education, job training and recovery. These individuals champion programs that increase community safety and promote a greater understanding of justice and fairness in the criminal justice system. This work holds offenders accountable yet connects them with the opportunities and tools they need to rebuild their lives.

"These organizations are doing innovative work to educate, employ and keep ex-offenders on track, which will reduce recidivism rates and increase public safety in California," said Attorney General Harris. "These awardees are keeping ex-offenders accountable by empowering them to rebuild their lives and re-enter their communities with a toolbox of new skills and opportunities. We want to recognize their great work, sharing their efforts as best practices for others to follow." 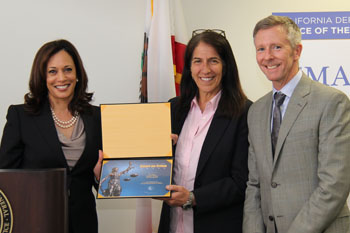 Originally established by the San Francisco Sheriff’s Department in 2003, Five Keys was the first charter school in the country to operate inside of a county jail. Today, Five Keys has a daily enrollment of more than 3,000 students in six jail locations and numerous satellite campuses in partnership with community-based organizations and city agencies throughout San Francisco and Los Angeles. 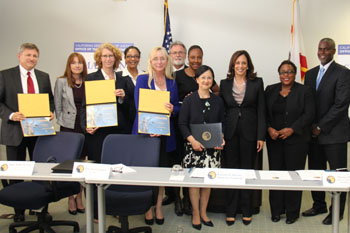 The Conviction and Sentence Alternatives Program of the U.S. District Court for the Central District of California (Southern CA) – The Conviction and Sentence Alternatives (CASA) Program, offers individuals a pathway out of the criminal justice system. The first alternative sentencing program in the Central District of California, CASA offers treatment, sanction alternatives and incentives to select federal defendants.

Participants must plead guilty and successfully complete programs designed to address the underlying causes of their criminal conduct, such as substance abuse treatment or employment/education services. The felony will then either be dismissed or a probationary sentence will be imposed instead of prison. CASA just finished its 24-month pilot phase and has been adopted as a permanent program. Since it was launched, 60 percent of participants have graduated and 33 percent remain in the program.

Participation is entirely voluntary and must be approved by the judge assigned to the defendant’s criminal case.

Program participants are trained and employed in and out-of-custody in electronics recycling. They work 30 hours per week and are paid fair market wages set by the state; a portion of all money earned goes to the victims of the participants’ crimes. Located inside the N.A. Chaderjian Youth Correctional Facility in Stockton, Merit Partners is the only operation of its kind in a California correctional facility.

Tom Gammon is a former Silicon Valley executive who conceived Merit Partners with the belief that an offender has to have hope and the ability to work in order to change a life of crime.

Suzy McCausland, Ph.D., an expert in the complexities of dynamic social-system change, co-founded Merit Partners because she believes that skills and attitudes to succeed come only after people believe their efforts to learn will be rewarded. 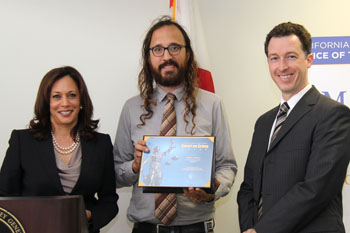 Brian Fox and Chris Zwicke accept a Smart on Crime Award on behalf of Kabira Stokes.

Kabira Stokes – Isidore Electronics Recycling (Southern CA) – Kabira Stokes is the founder and CEO of Isidore Electronics Recycling, a Los Angeles startup working to ensure that resources – both human and natural – are valued, not wasted. Isidore employs people with criminal records to recycle electronic waste for companies seeking a more responsible way to manage their environmental footprint and avoid exporting e-waste to developing countries that have poor environmental and workplace standards.

Kabira Stokes launched Isidore Electronics Recycling in 2011. She holds a Master’s degree in public policy from the University of Southern California with a focus in Prison Reentry Policy and Environmental Governance. 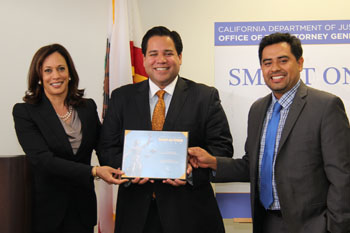 Ruben Gonzalez and Luis Barrera Castañón accept a Smart on Crime Award on behalf of the LA Area Chamber of Commerce.

Los Angeles Area Chamber of Commerce (Southern CA) – The Los Angeles Area Chamber of Commerce played an integral role in helping the City of Los Angeles become the first major city to formally support Proposition 47, which reduced penalties for some crimes. The Chamber recognizes the importance of access to jobs for the formerly incarcerated. In that spirit, it has led efforts to employ offenders that are being released from LA County’s Back on Track program, an initiative launched by Attorney General Harris. The engagement from the LA Chamber is serving as a model for Chambers across the state and the country.