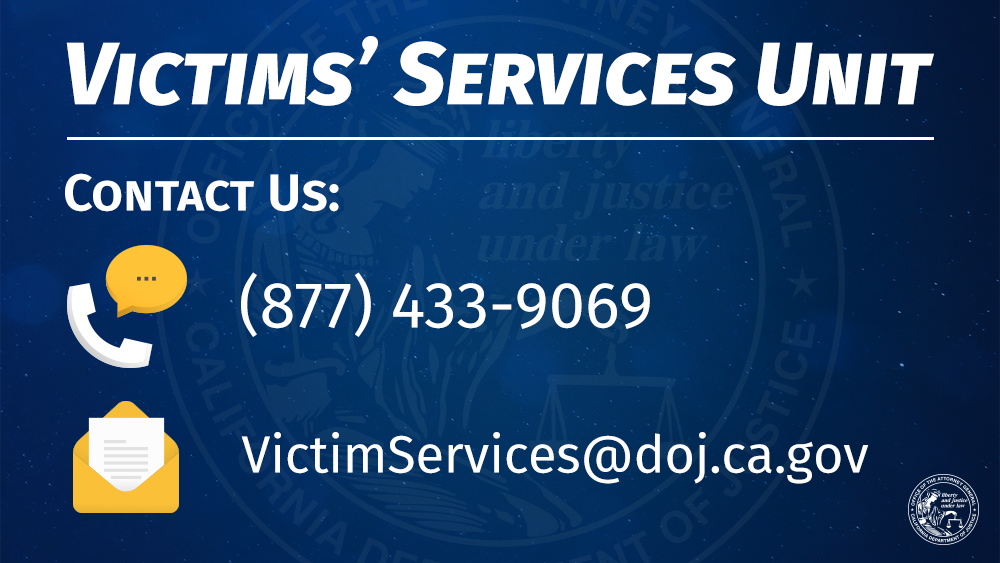 The Victims’ Services Unit (VSU) was created in 1999 to better serve crime victims and their families. Victims have rights and Attorney General Bonta is committed to ensuring those rights are protected. VSU offers support and information to victims and their families at every stage of the criminal process. The unit accomplishes this by advocating for victims, and by helping identify and close any gaps in services available to victims offered by all levels of government. The unit works in conjunction with victim service providers and frontline prosecutors all across the state.

VSU works to provide client-centered, trauma-informed, and culturally sensitive services to all crime victims, including underserved, at-risk, underrepresented, and vulnerable populations. Through the unit’s services, victims can track the status of appeals, recusal cases, and other matters being handled by DOJ’s prosecutors. VSU has a dedicated and well-trained team of advocates who provide appeal notifications to victims and their families. These updates allow victims and their families to exercise their rights to address the court or otherwise participate in parole, clemency, and execution proceedings.

VSU also supports service providers and members of the public in tracking the progress of sexual assault evidence kits as they are processed both at the state and local level through the Sexual Assault Forensic Evidence Tracking (SAFE-T database). Importantly, VSU’s advocates work to help victims and their families acccess available resources that are a critical part of the healing process, such as mental health services, safety net services, and assistance through the California Victim Compensation Board for related crime expenses.

VSU liaises with service providers, community-based organizations, faith-based organizations, and government agencies in all of California’s 58 counties to assist victims and their families navigate the oftentimes complex criminal justice system. Connecting with local communities and sharing with them the services we provide is of the utmost importance. As a result, our team takes steps to participate in outreach, roundtables, and trainings in each of these counties wherever possible.

To receive information on resources, notification of an appeal, or notification on a case the Attorney General's Office is prosecuting, please visit https://oag.ca.gov/victimservices/notification, call VSU at (877) 433-9069 or email VSU at VictimServices@doj.ca.gov. To learn more about the work of VSU, please watch our Demystifying the DOJ Presentation on the Victims’ Services Unit.

What are my rights as a victim?

Victims are entitled to rights pre-trial, during trial, post-conviction, and when their offender tries to appeal their conviction. The full list of rights can be found on the Marsy’s Law Card.

Can I get compensation and restitution as a crime victim?

Crime victims or their next of kin may ask the court for money for losses you suffered because of the crime. This is called restitution and is paid by the defendant. You have the right to be compensated for some crime-related losses, such as personal injury, counseling, lost wages, medical bills, and funeral and burial expenses.

What if the defendant cannot pay restitution and I have no insurance?

In California, many victims of crime, their families, their loved ones and witnesses have the right to compensation. You can file a claim right away with the Victim Compensation Program. You don't have to wait for the offender to be arrested. Compensation is available for: mental health treatment and counseling; medical or dental expenses for the victim; lost wages or income; burial or funeral expenses; moving or relocation expenses; job retraining for a disabled victim; home or vehicle renovation or retrofitting for a permanently disabled victim; and financial support to care for the dependents of a victim who died or became disabled.

The expenses (or loss) must be related to the crime, and cannot be covered by another source (like insurance, your employer, the defendant). The program does not compensate anyone who committed or contributed to the crime, does not cooperate with law enforcement to prosecute the case, does not file an application for compensation, and files a late application without good reason for delay. For more information contact us, your local Victim Witness Office or the California Victim Compensation and Government Claims Board.

Do I have a right to speak at a sentencing hearing after the defendant is convicted?

After the defendant enters a guilty plea or is convicted, you have a right to ask about the sentencing recommendation and to be advised of the sentencing hearing. Before the judge sentences a felony offender, you have the right to make a statement to the court. Your Victim Advocate can help you with this.

How do I know when an individual will get out of prison?

The actual time an offender serves depends on the sentence, time credits and time served in local jail. If the offender is in local jail, the Victim Witness Center in your county can give you an idea of when the offender will be released. If the offender is in a state prison, contact the California Department of Corrections and Rehabilitation’s Office of Victim & Survivor Rights & Services at 1-877-256-6877 and/or victimservices@cdcr.ca.gov. Victims can also ask to be notified if the individual escapes or dies. In addition, members of the public may also consider using the VINE system as an additional tool for information on criminal cases and an individual’s custody status.

What is an appeal?

One of VSU’s primary roles in supporting victims and their families in California is at the appellate stage of criminal cases. An appeal is when a defendant challenges the outcome of their trial. Usually this is because they believe a legal error occurred at their trial, meaning that a judge or one of the lawyers made a mistake. By taking an appeal, the defendant asks a reviewing court to find that an error occurred and overturn the verdict or sentence. Appellate Courts review the trial court record, which may include court transcripts and other evidence introduced at trial, to decide if any legal errors were made that contributed to the defendant’s conviction, or affected his or her sentence. Both the Courts of Appeal and the California Supreme Court can change or modify a judgment. In very rare instances, cases can be appealed to the United States Supreme Court.

It is important for both members of the public and service providers to know that while most state appeals must be brought within 60 days of conviction, the appellate process can take years and, under certain circumstances, appeals can be filed at a later time. Accordingly, victims, survivors, and family members should consider reaching out to VSU or the California Department of Corrections and Rehabilitation to request to be made aware of such developments if they arise.

If a Court of Appeal finds that the proceedings were conducted correctly, the judgment is affirmed, which means that the conviction and sentence will not be changed. Even if a Court of Appeal finds that a legal error was made by the trial court, the judgment will only be reversed if the error was prejudicial, meaning the error was significant enough that there’s a reasonable probability it made a difference in the outcome. Sometimes an appellate court will overturn one conviction in a multi-count case but affirm others. Appeals typically go through Courts of Appeal first, and if the defendant — who is often called the appellant in these instances — is dissatisfied with the decision of a Court of Appeal, they can then attempt to get their case heard before the California Supreme Court and possibly the U.S. Supreme Court.

In the event that a case is reversed, it can be sent back to the trial court for a new trial, a new sentencing hearing, or some other proceeding to correct the error. If a new trial or sentencing hearing is granted, crime victims and witnesses may have to come to court and testify or share a victim impact statement again.

Parole is a supervised program that takes place when a person convicted of a felony and sentenced to prison is released and re-integrated into the community to serve the remainder of his or her sentence. Sometimes parole release is automatic, whereas in some cases, the defendant will have a parole hearing to determine whether parole is appropriate. People who are sentenced to a life term (e.g., 15 years-to-life or 25 years-to-life) are given a Minimum Eligible Parole Date (MEPD). The incarcerated individual has a parole hearing approximately 13 months before the MEPD. Victims can ask the Board of Parole Hearings (at 916-445-4072) or the Department of Corrections (at 1-877-256-6877) when an incarcerated individual’s MEPD is.

Can I go to the parole hearing and can I make a statement?

If a victim wants to go to a parole hearing, they must ask the Board of Parole Hearings (BPH). To be notified of the hearing, victims must complete a form stating they want notification. This can be done through VSU, the Department of Corrections, or the BPH. Only victims, next of kin, and immediate family members can speak at parole hearings. Generally, the BPH will let two people speak. Those eligible to speak include a spouse, children, parents, brothers and sisters, grandchildren, and grandparents.

How can I protect myself when the person who committed a crime that impacted me or my family is released from custody?

The Department of Corrections may help victims depending on the type of case. Upon the victim’s request, the Department of Corrections may place special conditions on the parolee such as out of county placement or stay away order protecting the victim and family members from any contact from the defendant. Parolees also must obey all laws, obtain permission before traveling more than 50 miles, notify parole agent of any change in job or residence and are prohibited from having firearms.

View Background - People v. Michael Angelo Morales, pdf. In addition to information on the death penalty in California, this document provides factual descriptions and background in the case of Michael Angelo Morales, who was convicted by a Ventura County jury in 1983 and sentenced to be executed. Morales has petitioned the Governor for a granting of clemency. The background information includes a factual descriptions of the crime, photographs of the victim, victim impact statements from family members and a case chronology

View Background - People v. Clarence Ray Allen, pdf. In addition to information on capital punishment in California, this document provides factual descriptions of the multiple violent felony crimes for which Clarence Ray Allen was convicted and executed; a chronology of the litigation in this case; photographs of the victims; and victim impact statements from family members.