California Assembly Bill 3099 (AB 3099) calls for the California Department of Justice to provide training and guidance to law enforcement agencies and tribal governments to help reduce uncertainty regarding criminal jurisdiction and improve public safety on tribal lands. The new effort also includes funds to study challenges related to the reporting and identification of missing and murdered Native Americans in California, particularly women and girls. California is home to more people of Native American and Alaskan Native heritage than any other state in the country — with approximately 176 California Native American Tribes and a little over 100 separate tribal reservations.

In 1953, Congress enacted Public Law 83-280 (PL 280), expressly transferring criminal jurisdiction over most crimes committed by or against Native Americans on tribal land from the federal government to designated states, including California. As a result, California and tribal governments share concurrent criminal jurisdiction — with the federal government in limited circumstances — on tribal lands in the state. Although PL 280 has been in existence for almost 70 years, its requirements and implications often remain confusing among state, local, and tribal authorities. Generally, the complexity of PL 280 can and has led to public safety uncertainty and frustration among tribal communities and their neighbors. AB 3099 highlights the importance of providing for the consistent application of PL 280 through education, training, technical assistance, and increased coordination among California’s sovereign tribal governments and local authorities in the 34 California counties that touch on tribal lands.

AB 3099 also calls for the California Department of Justice to conduct a study to determine how to increase state criminal justice protective and investigative resources for reporting and identifying missing Native Americans in California. Numerous studies have already highlighted concerns among tribal nations regarding the number of missing Native Americans, both reported and unreported, across the United States, particularly women and girls. For instance, based on data from the National Crime Information Center Missing Person File, American Indians, Alaska Natives, Native Hawaiians, and Pacific Islanders combined made up the second highest number of reported missing persons in 2018, despite making up the smallest portion of the U.S. population. However, given many of the existing jurisdictional challenges, clear data on the scope of the issue in California remains limited. According to the Federal Bureau of Investigation, there were approximately 1,496 active end-of-year missing persons cases out of a total of 9,575 reports for American Indian and Alaska Natives across the United States in 2020.

In order to help address these challenges, AB 3099 works to fill the gaps by establishing the Tribal Assistance Program within the California Department of Justice’s Office of Native American Affairs. The law requires the new program over a period of five years, among other things, to: 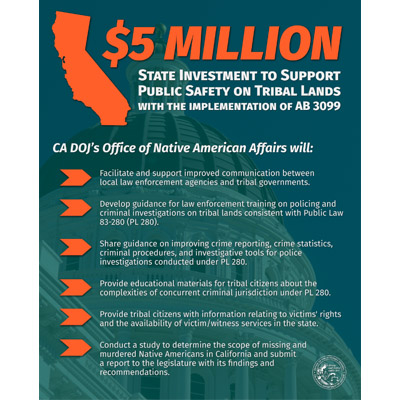 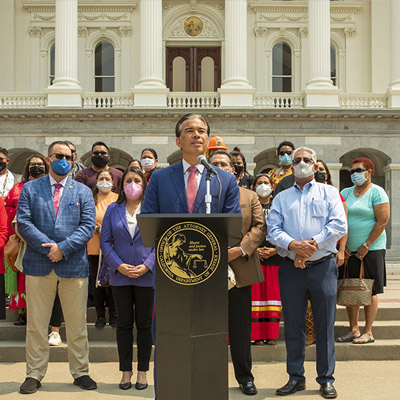 What has been the Federal Response to Missing Murdered Indigenous People (MMIP)?

In April of 2022, the U.S. Department of Justice launched the Missing or Murdered Indigenous Persons (MMIP) webpage as part of the Department’s Tribal Justice and Safety website, which houses other Tribal initiatives at U.S. DOJ such as the Tribal Access Program, grant opportunities, consultations, and several other resources for tribes. The new MMIP page details U.S. DOJ’s efforts to address the disproportionately high rates of violence experienced by Native Americans, and relatedly, the high rates of indigenous persons reported missing. To learn more, please visit https://www.justice.gov/tribal/mmip.

There have been several initiatives that have been undertaken by the federal government related to MMIP, including but not limited to the following: 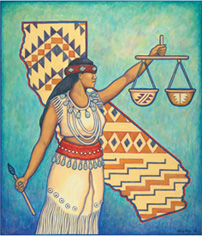